Having received my Raspberry Pi I was keen to do something interesting with it, hopefully spark some interest from my two boys. I’ve used it as an XBMC connected to the main TV as well as controlling LEDs. I came across the following two Blog posts and was keen to reproduce this myself; the boys seemed keen too. Note this sort of thing is completely new to me – I would have been completely lost without the information in the Blog articles below as well as the excellent tutorials on the Adafruit website.

Following these two blog posts I went ahead and purchased the following items:

The Adafruit 16-channel PWM driver is required as the Raspberry Pi only natively supports one PWM channel (on GPIO 18) – this project requires two (one for the engine and one for the steering servo). The Adafruit PWM board allows the Pi to communicate with 16 different PWM devices via the Pi’s built-in hardware I2C support.

The motor driver is for interfacing between PWM input (0 .. 4095 for motor speed) and the DC output as required by the Lego motor.

The next problem was power – it became apparent that I would need three separate power sources:

From the Adafruit servo tutorial:

Why not use the +5V supply on the Raspberry Pi? Switching directions on the servo can cause a lot of noise on the supply, and the servo(s) will cause the voltage to fluctuate significantly, which is a bad situation for the Pi. It's highly recommended to use an external 5V supply with servo motors to avoid problems caused by voltage drops on the Pi's 5V line.

Note the Lego 8881 9v Battery Box (6xAA) may have been a better choice as it is cheaper and holds AA batteries.

To help with the wiring (especially for when wires got accidently pulled out) I created the following wiring diagram using the excellent modelling tool Enterprise Architect from Sparx Systems (you can tell what I do for a living). 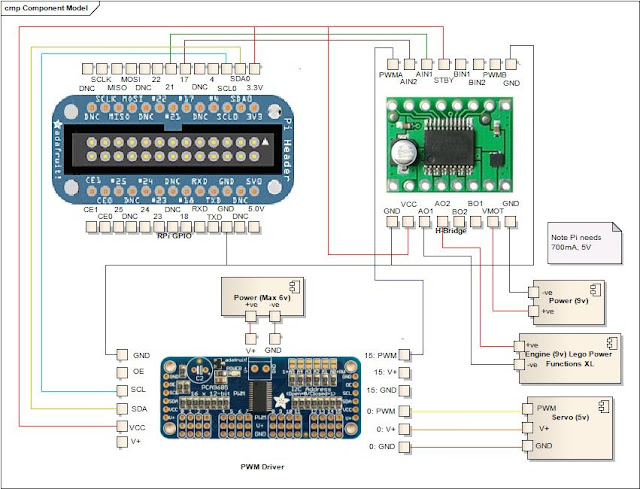 My first attempt was with the Lego Technic Dune Buggy (8048). The engine and servo actually fitted very nicely into the model; however it soon became apparent that there was going to be no way to fit the three power sources. This led to a temporary loss of interest and put the project on hold for six months.

Initially I had no particular plans for controlling the car – I saw that as the least of my worries; something to do once I’d got all of the other bits. When discussing the project with work colleagues they suggested controlling the car with a PS3 controller; I had no idea that they actually used Bluetooth assuming Sony would have instead used a proprietary protocol.

As the Pi doesn’t have built-in Bluetooth I went ahead and bought a Plugable USB Bluetooth 4.0 micro adapter from Amazon. While not on the list of verified Bluetooth adapters I had no problem getting this to work – really was just a matter of plugging it in.

There are a number of excellent articles for getting the PS3 Dualshock 3 controller working with Linux. These two are quite similar and specific to the Raspberry Pi:

I have an outstanding issue in that the PS3 controller doesn’t vibrate to indicate that sixad has connected, any tips on how to fix this would be much appreciated. The confusing thing is that the controller does get registered (as /dev/input/js0). I’m sure I had this working previously before having to rebuild the Linux installation (SD card corruption following power failure, oops).

As can be seen from the final Python code below, the pygame joystick library makes interfacing with the controller extremely easy.

We had an old Lego 4WD 8435 built and hanging around gathering dust on a shelf that we had forgotten about – we instantly decided that this would be perfect for the project as it looked like it had plenty of space for all of the components. We had to pull out the piston in the engine bay as well as the seats and both pulleys – once they were gone everything fitted in surprisingly well- the Anker battery in particular was a perfect fit.

Both engine and servo mounting required significant reinforcement around the mounting point as they both were pulling the model apart.
Obligatory YouTube video: 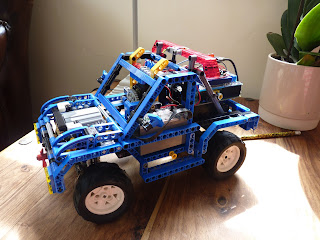 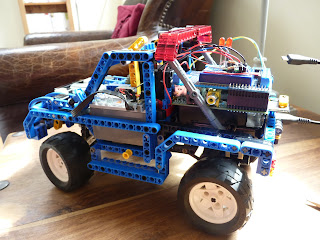 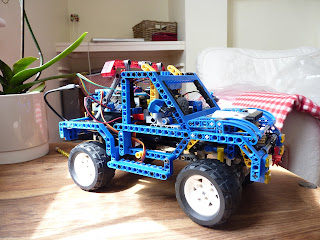 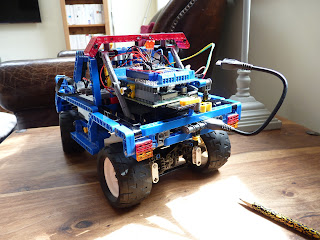 Living in the UK, I managed to source the majority of the technical components from the UK Adafruit reseller, SK Pang electronics; I have found them to be very reliable.

All of the Lego items were purchased direct from the Lego shop.

Thanks to both Tom Rees and Paul Weeks for the inspiration for this project. Please do let me know if there is anything I have got wrong or things that could be improved – as stated, this is all new to me.

I've been cleaning up the code a little and haven't yet tested this version - apologies if there are bugs, will check ASAP.